I’ve been thinking about Gardens.

At this time of year, although there is still work that can be done in the garden, and at the allotment, it feels like a time for reflection. To think back over the gardening year and review what has worked and what not. This reflection allows me to plan ahead for next year. To decide if there are gaps that need filling, what annuals to grow and plant. What veg am I going to inflict on the family.

These musings have led me to think further back. As an adult I have always needed my own private outdoor space. When I bought my first flat, on the list of pre-requisites was a garden. Even in my first rented property there was an overgrown jungle that I helped pull back from the brink.

When I moved in with my lovely man he had a small patch of land that I could tend. We borrowed a bit of the neighbours garden to grow veg in raised beds. And when we decided to move, the big motivator was to have more outdoor space for a small child to play in. 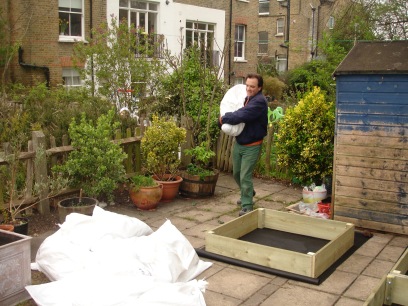 Stealing the neighbours gardend for vegetables

My mind has been wandering further back recently to my childhood garden. A potential design project led me to think about why I have always needed this space to cultivate. I was never a child who wanted a bit of soil to grow seeds and watch them poke their leaves above the soil.

But my dad was.

He trained as a horticulturist. He and my mum decamped to York soon after they married so he could attend St John’s College. His first teaching job was at Barclay School in Stevenage where he taught horticulture and inspired young people to become the next generation of gardeners.

At home my dad created a garden for his family. There were five children and lots of neighbour’s children who were in and out. Footballs, cricket balls, tennis balls and golf balls regularly ended up in the borders. Then there was the climbing frame and paddling pool and swing. He built us a sandpit. It was a happy place to be. It was west facing, like my garden now. The sun shone on the terrace in the late afternoon and on the raspberries at the other end of the garden in the morning. As a little girl I helped to pick the raspberries, stabbing my fingers on the thorns. It now makes sense to me why raspberries were one of the first things I planted in my current garden. There were other veg, apple trees and a potato patch. It wasn’t a big garden but it felt like it when I was little.

I remember lupins and roses and lots of flowering shrubs.  Borders came and went. I can’t remember why, but the tree in the middle of the garden was removed one year. We sunbathed on the lawn and made camps in the upturned climbing frame. It was a garden where memories were made.

As the years went by and dad became older he found it harder to look after the garden. Mind you it never stopped him wanting to pick the apples every year and when it was too difficult for him I found myself up a ladder with dad at the base stretching for the highest crop. For his 90th and final birthday we bought him a raised table planter. He loved the cabbages and lettuces that we sowed together. With pride he showed me how well they were doing and assiduously kept them free of creepy crawlies. 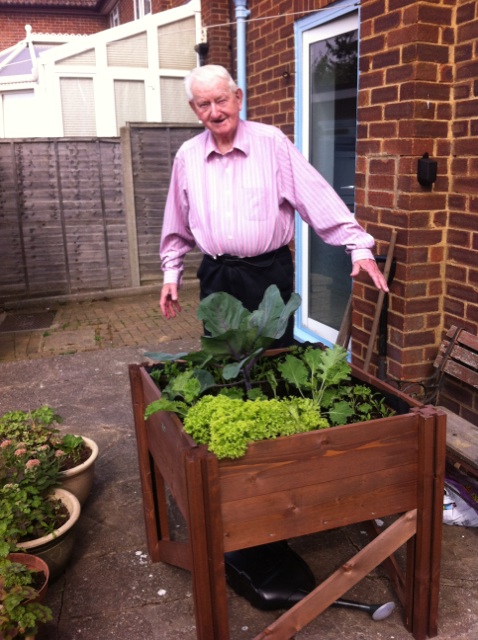 I have my dad’s genes. My love of gardens and gardening has been inherited from him. He made the garden a place you wanted to be in. It was a happy place. So as the snow falls outside the window and I think forward to the new year I realise that he has made me want to make gardens that create that same sense of happiness and joy. Gardens that will create memories for other people as my childhood garden has for me.