I have a garden which, if you have read any of my posts, you will know I love.

When we first moved here 9 years ago Olli was four and a half and it was a perfect garden for a little boy to play in. It was one of the main reasons we bought the house. Grass from side to side and top to bottom. Great to play cricket, kick a ball, run about in or just lay on the grass.  You could walk out the door and straight down into the garden. No supervision needed. It reminded me of my childhood garden. 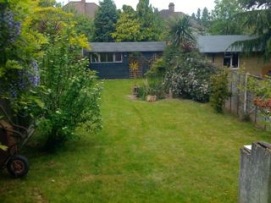 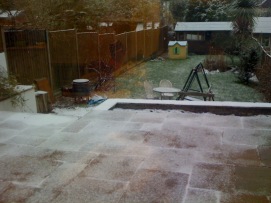 I designed the new terrace with a border along one side and the front. Wide steps leading down to the grass. Our wonderful builders who were renovating the house interpreting my scribbled plan perfectly. I would plant lavender, rosemary, sage, mint and a wonderful bronze fennel in the terrace border. I think I thought somewhere in my head that it would be a garden to develop over time. I also planted a lot of vegetables.

As the years have gone by Olli has outgrown it for playing – the cricket ball goes two or three doors down, he doesn’t really run about in it any more and sometimes he plays catch with a willing adult. In the summer he does love laying on the grass though.

I, on the other hand, have yearned for more plants. After a wait of nearly 6 years I acquired an allotment plot. The veg started to disappear from the garden leaving space for normal garden plants. Slowly inching my way into the grass, I have commandeered the grass, cutting away small sections and adding the plants I am addicted to.

The border with the vine was first. A little bit here and there. I had planted fruit trees and raspberry canes but bulbs started to appear in spring. I moved the fennel when it got too large on the terrace. Some ornamental grasses bought for me by my mother in law, Diana, broke up the garden half way down. A rudbeckia tucked away behind the apple tree. 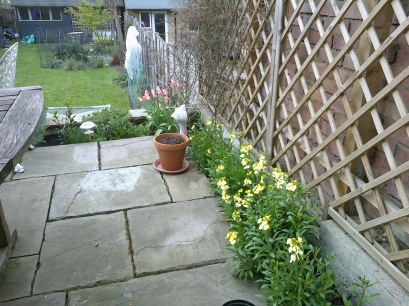 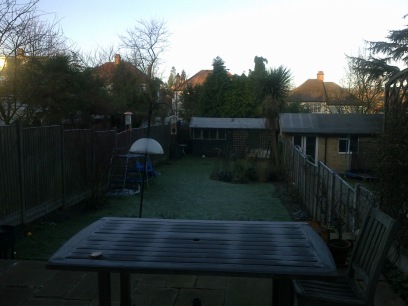 Two years ago I started a course in Garden Design. I had wanted to do this for a number of years but the time was never quite right. When my lovely mum died and I was lolling about finding no impetus to do anything my husband, who knows that playing video games on my phone was not really me, suggested that I should look into doing the course I had long spoken about.  Little did he know what he was about to unleash.

Suddenly I needed much larger borders to experiment with the shade-loving plants we had been studying.  More grass went. This time on the North shaded side of the garden. Negotiations were had about the merits of the climbing frame and how often it was REALLY played on. A compromise was struck when I promised a willow camp. 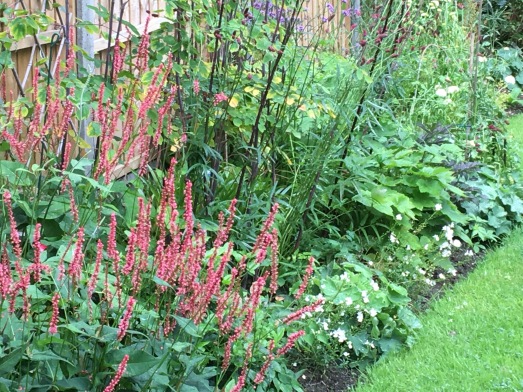 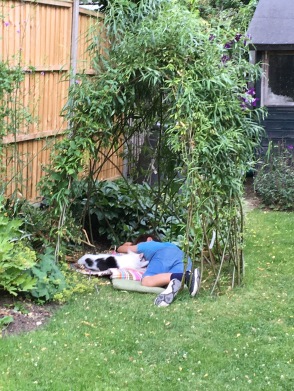 My plant obsession was fed by visits to the many gardens of brilliant designers. Flower shows made me want more plants. Finally at the end of the summer I went cap in hand to my long-suffering husband and son and asked to take away more grass. I would, I said, leave enough for catch across the beds. The cry went up that grass was needed to lay on. I promised that there would still be plenty of grass to do just that.

So in early Autumn I designed my two new borders properly. As I had been taught to do. Leaving space for plants to grow and fill the space. I was not just going to go to the garden centre and buy one plant of each type, I would buy three or five. I had plants delivered from a proper nursery in Wiltshire, Arvensis Perennials, who made the whole experience easy and stress free. Plants already there were moved into better positions. You could feel them heaving a sigh of relief at the extra space.

I can’t promise that this will be the end of it. A little more grass may still go but I promise that I will leave enough so that when the sun is hot and the plants are looking beautiful you can still lay on it.